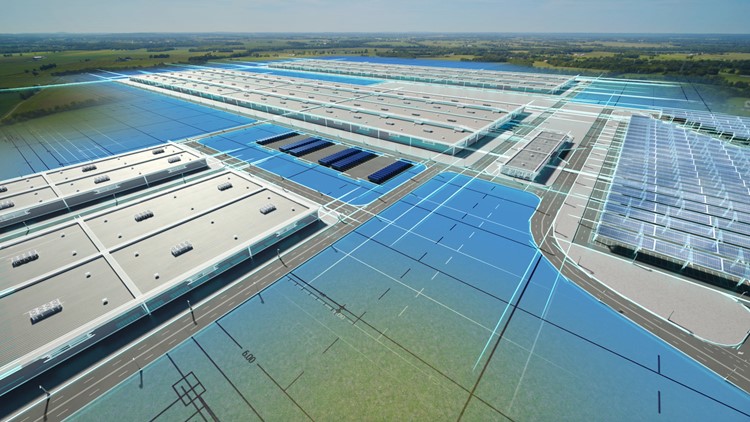 FRANKFORT, Ky. (Sept. 27, 2021) – Gov. Andy Beshear, Ford Motor Company and SK Innovation announced the single largest economic development project in the history of the commonwealth on Monday, celebrating a transformative $5.8 billion investment that will create 5,000 jobs and places Kentucky at the forefront of the automotive industry’s future.

Ford Motor Co. and SK Innovation will build two electric battery plants in the BlueOvalSK Battery Park in Hardin County, investing a record $5.8 billion. With this announcement, Kentucky shatters every annual economic development record in the books for yearly investment totals and is on pace for its best job-creating year in history. Kentucky workers at BlueOvalSK Battery Park will supply Ford’s North American assembly plants with batteries that will power the next generation of Ford and Lincoln electric vehicles. Production of the advance lithium-ion batteries will begin in 2025.

The plants will be built on the 1,551-acre economic development site near Interstate Highway 65 in Glendale and will generate 86 gigawatt hours, which commonwealth officials believe will make Kentucky the nation’s largest producer of electric automotive batteries.

“We thank Ford Motor Co. and SK Innovation for their investment in Team Kentucky,” said Gov. Beshear. “This is the single largest investment in the history of our state, and this project solidifies our leadership role in the future of the automotive manufacturing industry. It will transform our economy, creating a better Kentucky with more opportunities for our families for generations. Our economy is on fire – and now, it’s electric. Never again will we be thought of as a flyover state. Our time is now. Our future is now.”

“Ford is very excited to make this historic investment in the great state of Kentucky,” said Lisa Drake, Ford North America chief operating officer. “Kentucky has been an incredible partner to Ford for more than 100 years and is home to Louisville Assembly Plant and Kentucky Truck Plant. With this announcement, Kentucky will play an essential role as Ford fulfills its commitment to lead the electric vehicle revolution and create thousands of jobs in the commonwealth, and we look forward to working with Kentuckians to create the future together.”

At the Glendale megasite, Kentucky and its partners will shift from the traditional automobile to the electric vehicle of the future. Ford expects at least 40% of its global sales to be electric vehicles by 2030, and the batteries made in Kentucky will help power that transition.

Century-Long Partnership
The historic announcement builds on the more than century-long partnership between Kentucky and Ford.

Kentucky workers rolled a Model T off a Ford assembly line in Louisville in 1913. The Louisville Assembly Plant and Kentucky Truck Plant in Louisville directly employ about 13,000 workers with thousands more working for suppliers and dealerships.

From direct Ford employees to suppliers and dealers, Ford helped create jobs for approximately 120,000 people in Kentucky – not including the jobs coming with today’s announcement.

A 2020 Economic Impact Report estimated that Ford’s gross domestic product impact in Kentucky was approximately $11.7 billion. Ford has directed more than $6.3 billion in investments and upgrades to Kentucky since 1987.

Booming Economy and Unlimited Potential
Even in the midst of a global pandemic and a subsequent national economic downturn, Gov. Beshear has prioritized good-paying jobs in every corner of the commonwealth, attracting nearly 400 projects creating more than 20,600 full-time jobs for Kentuckians, with the private sector announcing more than $11.4 billion in investment in Kentucky since December 2019.

This year alone, the Governor has announced over $8.7 billion in total planned investment and 11,700 full-time jobs in private sector new-location and expansion projects across the coming years. Through July, Kentucky’s average incentivized hourly wage was $23.47 before benefits, a 6.2% increase over the previous year.

“This is our best year ever, and it’s only September,” Gov. Beshear said.

Through a bipartisan agreement with legislators earlier this year, the Governor launched the Better Kentucky Plan, which aims to create 14,500 jobs and help Kentucky lead in the post-COVID economy. The plan allocates more than $750 million in American Rescue Plan Act funds to build schools, expand access to broadband and deliver clean drinking water and quality sewer systems across the commonwealth. Through the plan, the state directed $75 million to upgrade vocational education centers.

In July, thanks to strong fiscal management by the Beshear administration, the state budget office reported the commonwealth ended the 2021 fiscal year with a general fund surplus of over $1.1 billion – the highest ever in the commonwealth – and a 10.9% increase in general fund receipts to $12.8 billion.

In May, Moody’s Analytics published a positive economic outlook for Kentucky, noting mass vaccination as the driving force behind a sustained recovery in consumer services. The state’s recovery, Moody’s said, benefited from earlier reopening efforts and increased demand for manufactured goods over services. The report also found Kentucky’s manufacturing industry outperformed the nation’s since the national downturn last year. Kentucky remains the No. 1 vehicle producer in the nation per capita, thanks in large part to Ford’s production.

Fitch Ratings in May improved the state’s financial outlook to stable, reflecting the commonwealth’s solid economic recovery. The state’s April sales tax receipts set an all-time monthly record at $486.5 million, as did vehicle usage tax receipts at over $64 million.

In March, Site Selection magazine’s annual Governor’s Cup rankings for 2020 positioned Kentucky atop the South Central region, and third nationally, for qualifying projects per capita. The commonwealth also placed seventh overall in total projects, the highest of any state with a population under 5 million. Site Selection also recently placed Kentucky in a tie for fifth in its 2021 Prosperity Cup rankings, positioning the state among the national leaders for business climate.

Kentucky has an unmatched logistical advantage in recruiting jobs. Kentucky is within one day’s drive of two-thirds of the U.S. population.

Kentucky is the only state with three international air-shipping hubs with those operated by UPS, DHL and Amazon Prime.